Installing Debian ARM64 on a Raspberry Pi 3 in UEFI mode


That's right baby, we're talking vanilla Debian ARM64 (not Raspbian, not Armbian) in pure UEFI mode, where you'll get a GRUB UEFI prompt allowing you to change options at boot and everything.

At long last, the Raspberry Pi can be used to install vanilla GNU/Linux distributions in the same manner as you can do on a UEFI PC. Isn't that nice? 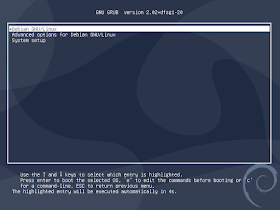 Not that I don't like Raspbian or Armbian (as a matter of fact I am impressed by the very fine job the Armbian maintainers are doing with their distro), but I have now spent enough time helping with the UEFI Raspberry Pi 3 effort not to push this whole endeavour to its logical conclusion: Install vanilla ARM64 GNU/Linux distros. That's because, in terms of long term support and features, nothing beats a vanilla distro. I mean, what's the point of having an 64-bit CPU if the distro you're going to install forces you to use 32-bit?

Note that our goal here is to install the system on a SD card, through netinstall, using a single media for the whole installation process.

In other words, there is no need to use an additional USB Flash Drive, as we could do, to boot the Debian installer and then install from USB to SD. This is mostly because it's inconvenient to have to use two drives when one can most certainly do, and also because while USB to SD may look easier on paper (no need to fiddle with the "CD-ROM" device for instance) it's actually more difficult to complete properly.

Thus, while I'll give you some pointers on how to perform a USB based installation in Appendix D, I can also tell you, from experience, that you are better off not trying to use a separate USB as your installation media and instead performing the installation from a single SD, as described in this guide.


Note: a complete example of how to achieve the first 3 steps below using DISKPART on Windows or fdisk + mkfs on Linux is provided in Appendix A at the end of this post.
Once you have completed the steps above, eject your SD card, insert it in your Pi 3 and power it up. Make sure no other media is plugged in besides the SD card. Especially, make sure that there aren't any USB Flash Drives or USB HDDs connected.


Unless you did something wrong, you should see the multicoloured boot screen, which indicates that the Raspberry Pi properly detected your SD media and is loading the low level CPU bootloader from it.

Then you should see the black and white Raspberry logo, which indicates that the Raspberry Pi UEFI firmware is running.

Wait for the GNU GRUB menu to appear (which it should do by default after the Pi logo disappears) and choose *Install (which should already be the default) and let the Debian installer process start.


Note: In case anything goes wrong during install, remember that you can use Alt-F4 to check the current installation log for details about the error.

If everything worked properly, your system will now boot into your brand new vanilla Debian ARM64 system. Enjoy!


Appendix A: How to create and format the SD partition for installation


IMPORTANT NOTE 1: Please make sure to select the disk that matches your SD media before issuing any of these commands. Using the wrong disk will irremediably destroy your data!

IMPORTANT NOTE 2: Do not be tempted to "force" FAT32 in DISKPART or mkfs and do not forget to set the bootable/active flag, else you will afoul of the issue described in Appendix C.


Note, if needed you can also force a specific partition type (e.g. set id=0e to force FAT16 LBA), but that shouldn't be needed as DISKPART should set the appropriate type accordingly.


The following assumes /dev/sdf is your SD/MMC device. Change it in all the commands below to use your actual device.

(Optional) If your drive was partitioned as GPT, or if you're not sure, you may want to issue the two following commands first. If it's MBR you can skip this step:


Now use fdisk and mkfs to partition the drive:


Appendix C: Help I screwed up my partitioning!


Of course you did. You thought you knew better, and now you are paying the price...

The problem in  a nutshell is that:
Now the good news is that this is recoverable, but you need to know what you're doing.

Appendix D: Installing to a SD from an USB Flash Drive


As I explained above, and though it may seem simpler, I would discourage to use this method to install Debian on a Raspberry Pi. But I can understand that, if you don't have a card reader, you may be constrained to using this method.

For the most part, this should work fine out of the box. As a matter of fact, if you do it this way, you won't have to fiddle with the "CD-ROM" media detection. However, I will now list some of the caveat you'll face if you proceed like:

Caveat 1: If you use guided partitioning your SD/MMC media will be formatted as GPT (because this is a UEFI system after all) which the Broadcom CPU used in the Raspberry Pi can not boot. It has to be MBR. How you are supposed to force MBR over GPT in the Debian partition manager, I'll let you figure out.

Caveat 2: Similarly, you need to go through the 0xef to 0x0e conversion of your ESP, as the Pi won't boot from that partition otherwise.

Caveat 3: Of course you will also need to duplicate all the bootcode.bin, fixup.bat and so on from your USB boot media onto the SD ESP partition if you want it to boot (which is the reason why is is much more convenient to just set the ESP and Debian installer on the SD right of the bat, so you don't risk forgetting to copy a file).

Caveat 4: When I tried USB to SD install, I found that the GRUB installer somehow didn't seem to create an efi/boot/bootaa64.efi, which, if left uncorrected, will prevent the system from booting automatically.
Pete Batard at 12:53